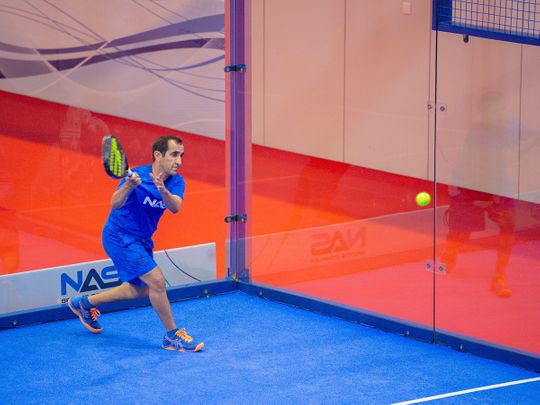 Held under the patronage of Sheikh Hamdan Bin Mohammed Bin Rashid Al Maktoum, Crown Prince of Dubai and Chairman of the Executive Council, and organized by the Dubai Sports Council, the NAS sports tournament was one of the main sporting attractions of the holy month of Ramadan since 2013.

They both secured a place in the last four of the competition after recording an impressive victory over their rivals. Riding on the efforts of Carlos Silva, Al Jawareh beat Spider Team 3-0 (25-19, 29-27, 25-20).

The volleyball championship semi-finals will take place tomorrow, where Emperor takes on Fohood Zabeel at 9 p.m. while Al Jawareh takes on Bin Thani at 11 p.m.

In the professional category of the Padel Championship, Javier Garrido – Lucas Campagnolo beat Saeed Mohammed AlMarri and Pablo Castillo 6-0, 6-2 to reach the quarter-finals.

Abdulla Ahli Ahmad and Jaime Chipi also sealed places in the next round after a 6-3, 6-3 win over Ramiro Garcia Romero and Jorge Tupayachi.

In the meantime, the quarter-finals of the different categories of the padel event will take place tomorrow. Sheikh Saeed Bin Maktoum Bin Juma Al Maktoum and Issa Al Marzouqi will meet Fernandio Mendes and Enrique Gonzalez. The game will start at 10:30 p.m.

Ali Omar Al Balushi, a member of the tournament organizing committee, recognized the high level of competitiveness and the technical level of the competitors.

“It demonstrates the excellent level of the country’s athletes, as well as residents and professionals, who traveled to Dubai to participate in the tournament,” he said.

Balushi also said that the ninth edition of the Nad Al Sheba Sports Tournament is the best in terms of technical level for the athletes, especially in volleyball, due to the decision of the organizing committee to modify some related competition regulations. to the number of participants of various nationalities in the presence of a greater number of stars of the game from the United Arab Emirates, the region and various countries of the world, which was positively reflected in the increase in the strength of the competetion.

“The volleyball teams had excellent technical standards, allowing tournament viewers to see great players from various countries, which added to the viewing pleasure and competitiveness of the competition.

Balushi also praised the efforts of team managers in selecting players and coaches, as well as finding sponsors, to build strong teams and deliver the most exciting matches.

One of the highlights of the Nad Al Sheba Sports Tournament 2022, the Spartan Nas Night Race, will take place on Saturday. The organizers spare no effort to make this event a resounding success. The competitions include 20 obstacles spanning a distance of 5 km.

Dubai Police, Dubai Roads and Transport Authority, Dubai Municipality and Dubai Corporation for Ambulance Services are the strategic partners for this year’s Nad Al Sheba Sports Tournament, while Tadawi Medical Center, Emirates Foundation ( Takatof), Dubai Duty Free, Pocari Sweat, Palazzo Versace Hotel Dubai and TecnoTree have signed on as sponsors for the ninth season of the event, which is one of the biggest events of its kind in terms of attendance and prize money .

10 things to do in the Detroit metro