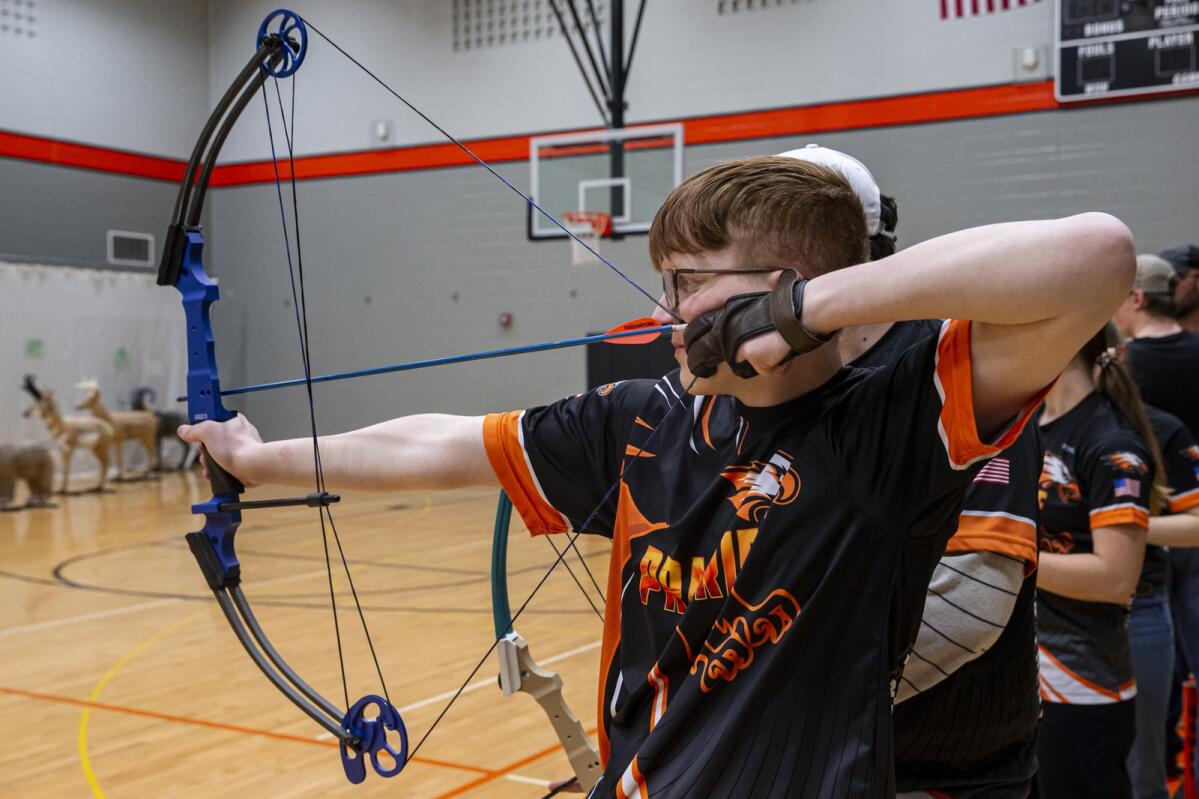 Students take aim April 18 during a Prairie Archery Club practice at Prairie Point Middle School. The club recently qualified for a national tournament to be held in May. (Nick Rohlman/The Gazette)

CEDAR RAPIDS — Students from the Prairie Archery Club who qualified for a national tournament focused last week, loading their arrows and shooting the bowstring before releasing them, aiming at foam targets in the gymnasium at the Prairie Point Middle School.

The aluminum arrows thumped when they hit their targets – either a foam bullseye or 3D foam animals of a turkey, coyote, bear, pronghorn and of a white-tailed deer. At the whistle, the students approached the targets and observed where their arrows landed before collecting them to start again.

Elizabeth Kacena, 18, a senior at Prairie High, said her aim was ‘dead’ and she was working to improve her release to ensure she hit her target every time as she was preparing for the national championships in May. Kacena, also a member of the bowling team, said the sports are similar. Archery is like “bowling put aside”, she said.

Kacena is one of 37 students from Prairie High School and Prairie Point Middle School to qualify for a national archery tournament next month in Louisville, Ky.

The students who qualified for the national championships returned to practice last week after their regular season ended in March after competing in the Iowa Schools State Tournament in Des Moines.

More than 1,800 archers from more than 120 Iowa schools participated in the state tournament. Forty-nine archers from the Prairie Archery Club qualified for the state. There are approximately 160 College Community School District students in grades seven through 12 on the archery team.

Claire Cornelius, 13, a seventh grader at Prairie Point Middle, joined the Prairie Archery Club after being introduced to Girl Scout sports when she was younger. She qualified for the state and said she felt like she trained better with friends by her side who made her feel “more comfortable and confident”.

They tease each other when they do a bad job and laugh about it, she says.

Skye Murillo, 12, a seventh grader at Prairie Point Middle, said she was inspired to try archery because of ‘The Hunger Games’, dystopian sci-fi films based on a trilogy of novels by author Suzanne Collins, where the characters often use bows and arrows.

At a practice earlier this year, coaches placed apples on human foam heads for target practice. Skye tried to aim for the apple and ended up shooting the arrow straight into a foam brow, she said with a laugh.

Prior to nationals, students focus on their mindset and the mechanics of archery, said Mike Feuerbach, coach of the team whose daughter, Madelynn Feuerback, 18, a senior at Prairie High, will compete in the national championships this year.

“Their hard work is paying off,” said Mike Feuerbach.

The sport is a bonding experience for Bock and his daughters — an 11th and seventh grader in the College Community School District, he said.

Qualifying for national championships shows “the dedication of these youngsters to the sport and the accomplishments they have made throughout the season,” Bock said.